When Apple first showed their M1 computers, I wasn't too impressed. They seemed fine and they were better but they didn't seem that much better.

But eventually the reviews started coming out and it was quickly starting to show that these were really good. Like, really good. The performance was insane and they didn't get particularly warm. And the models that had a fan weren't loud either, and there's even a model that doesn't have a fan: the ironically named Air. And even if they ran a little warm eventually after some long workload, they didn't run hot. They got tepid, and then quickly cooled down again.

And then there was a bunch of other nice things too. Like how they instantly wake up, how the screen doesn't cause seizures when changing resolutions or plugging in a monitor, how snappy macOS was, and how fast they encoded video.

So I held off on getting one initially, but eventually got one. I figured I'd sell my 2020 MBP before the value plummets in them, while getting a 2x performance upgrade and having no fan. My 2020 MBP fan would often spin their fans at max.

I felt kinda bad at the time, thinking I should use my 2020 MBP more, but when I read my "review" of it from earlier this summer I realized it was the plan all along:

Intel CPUs aren't that exciting anymore as you can see, and that's why I'm excited for an AMD or ARM powered Macbook Pro. And I hope to use this laptop until then.

And yes, it is exciting. That's what these M1 Macs are. They are the start of a new generation, and it's a great start. 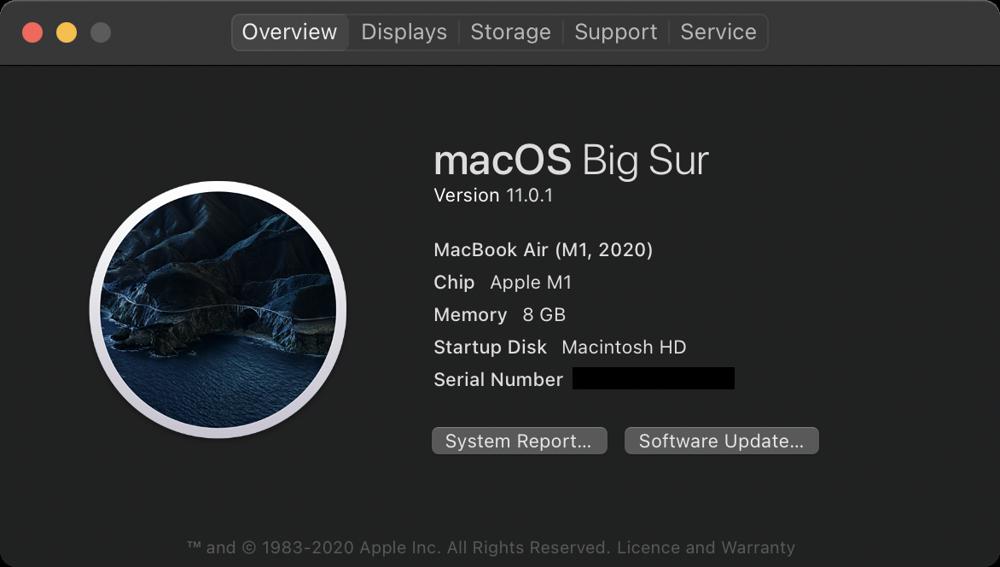 Ideally I'd like 16 GB of RAM, but I really hate Apple's RAM pricing so I couldn't swallow it.

Safari is insanely fast. I feel like the page is open before I hit enter. It just snaps and its loaded and rendered.

There are just generally fewer hiccups all around. macOS feels much snappier and less chuggier.

Having no fan is awesome. I'm so used to Macs having fans that whenever I do something intensive I have this habbit of taking of one of my headphones so I can hear how bad it is. Now I still do that, and hear nothing.

The keyboard and trackpad feels better than on my MBP2020. I think they should be the same but they just feel better, like the keys have more travel or something. Having no touch bar is nicer too. I didn't hate it on the MBP, but it was quite often I accidentally hit it.

The computer initially came with Big Sur 11.0. This version had a nasty bug where if I unplugged my CalDigit TS3 Plus dock, the computer would immediately lock up and reboot. 11.0.1 fixed it.

Rosetta is incredible. It really just works. I think it deserves an official award or something, like a nobel prize in software. I've run into nothing that works. Even intensive stuff like games and video editors work, and it's so seamless, you don't even notice it unless you look at Activity Monitor and see their "Architecture" is "Intel".

Video encoding speeds are f*ing nuts. Using Apple's hardware encoders aka VideoToolbox, I get around 180 FPS encoding 1080p H264 and HEVC. While I can get around 250 FPS encoding 1080p HEVC using NVENC with my GTX 1080 Ti on my desktop PC, that thing is loud and hot. This damn MacBook Air just sits there quietly and doesn't even get warm, spitting out HEVC 1080p at a rate of 180 FPS. What the hell.

Gaming performance is great, for the few Mac games there are. I tried World of Warcraft and The Sims 4 and they both ran fantastic. Although, as I mentioned in the No Fan section, you might run into thermal throttle issues, so if you plan on gaming a lot, get the MBP instead which has a fan.... or don't get a Mac at all. Mac gaming is far from great, but it's gotten better, way better, thanks to M1.

World of Warcraft running on my external 3440x1440 ultrawide monitor getting around 80 FPS in Orgrimmar. Insane for a fanless machine if you ask me (although, as I said earlier, you should cap it at a lower framerate to prevent thermal throttling; I've capped it at 60.)

I probably have more things to say but I can't think of any more right now past 1 AM.

But needless to say, the M1 is a great start to the arm generation of Macs and I am very eager to see what's next. I might be interested in a hypothetical 16-inch model.

For now, this Air is amazing, quiet and cool. And so freakin' fast.