The Eagle Ryzes... And Flies Away

I ordered some computer parts today:

The thing that's controversial about this, is that it wasn't long ago I built my Ryzen system. Judging from my receipts, it was at the very beginning of October 2017, just about 4 months ago at the time of writing this.

The first mistake I made was that I bought Ryzen right before Coffee Lake was released. I remember thinking at the time "well, Intel hasn't changed much the last couple of times, why would they now..." - and as it turns out, they changed alot, and for the better.

Basically, had I known how good Coffee Lake was gonna be, I probably would've bought a Coffee Lake system back then. But on the other hand, the availability was very bad at the time and I wanted to build a new computer right then, so I would've had a hard time waiting.

I had ran macOS on my machine, in other words, I had a Hackintosh. But I wasn't using it much, maybe once per month, so I figured I was sick of macOS and didn't wanna use it, which is true (I still think Windows 10 is better for me) but there are some aspects about macOS I really like and with the iMac Pro coming out and it's hype train, I kinda wanted to run, or atleast have the possibility to run, macOS again.

While it is somehow possible to run macOS with a Ryzen processor, through some hacked kernel or some ridiculous thing like that, I don't wanna have to jump through a million hoops.

For a while I also debated building a Hackintosh Mac Mini (which I may still do, although the chances now are much much lower) but even then I would have to mess with multiple monitors and keyboards/mices, and yuck.

TLDR: I thought I was done with Hackintoshing.

As for the other parts (the case and the CPU cooler), I just wanted new ones.

My current computer case, a Fractal Design Define R3, is one I bought used from a friend many years ago, and before that he had obviously used it for a few years... so this case has some wear and tear and I'm just kinda sick of it. I mean yeah it works, it's pretty damn quiet, but I feel like my CPU and GPU could get better cooling if there wasn't all those HDD cages blocking up the intake fans.

So I went with the Fractal Design Define C. While I have been wanting to go down to mITX, or atleast mATX, for a long long time, I basically came to the same conclusion: I can't.

I want my internal capture card, I want the good cooling, I want it to be almost dead silent... these just aren't things you can do with mITX. You can almost do them with mATX, but from my research, the mATX cases are still pretty big.

I recently also looked into the newly released Fractal Design Define R6, especially one with the tempered glass panel. That seems like a really hot (hot as in sexy) case, but it had a few problems for me: it's still very big and it's very expensive.

The Define C is smaller and costs effectively half of what the R6 does.

The only downside of the Define C, which is also a upside, is that it doesn't have a 5.25"/ODD slot. I am one of the few persons in the world that still use the disc drive in my computer, to rip DVDs/Blu-Rays, but I have done testing in the past and I have a USB-SATA connector thingy, so I will just use that. Frankly, I only use the disc drive occasionally, so it should be fine. I kinda wanna look into getting a nice enclosure for it though so it's just not "lying around".

I went with the non-windowed version of the Define C. The reason was that it's slightly cheaper, I won't have the LEDs from the inside of my computer shining up my room at night, and it should be slightly more quiet. I hope I won't regret this decision, but we shall see. Probably not the hardest task in the world to get a windowed panel afterwards if I really want it. I went for the tempered glass version afterall.

Ever since I started transcoding a lot of DVDs/Blu-Rays, I've been meaning to get a new CPU cooler, so that the CPU will run both cooler and quieter during the long amount of times that it does run at 100% usage, sometimes for weeks.

For the last 2-3 years or something, I've been using the famous Cooler Master Hyper 212 EVO, but with the fan replaced by a Noctua something, NF-P12 PWM or something like that. And honestly, it's been great. It's not that loud during load, and it's silent when idling.

But I've been wanting to get a Noctua CPU cooler for a long time so I figured I'm just gonna do it now. Ideally, I would've gone for the NH-D14 or NH-D15 but those are soooo huge that it just seems ridiculous to me, and I don't think I can access almost anything around my motherboard with those beasts on. The NH-U14S seemed like a better choice for me, except that it's probably gonna run slightly hotter than the NH-D14/D15. I think I'm gonna be happy with it, and I can use it for years to come.

(I don't want to use water cooling or AIO solutions because I am afraid they will leak.)

So what will I do with my current system, namely the motherboard and CPU? (I will keep the RAM, because it's good RAM (G Skill FlareX 2x8 GB 3200 MHz))

First, I will try to sell it, and I'm pretty sure I will manage to get it sold and cover maybe 40-50% of the expenses with this new build.

If I don't manage to sell it, I will have a very overpowered Unraid/Plex server, and I'm gonna have to get a new motherboard that has atleast 6 SATA ports.

We shall see. And I will probably make some benchmarks with x264 and x265 encoding and get those numbers on here.

I hope AMD does well even though I am leaving them, because Intel seriously needs some competition. Coffee Lake is so great because AMD pushed them.

I will probably have to be on Intel for the forseeable future, because of Hackintoshing.

Oh, and before I forget. Here's a updated table showing how good the Ryzen 1700X was. 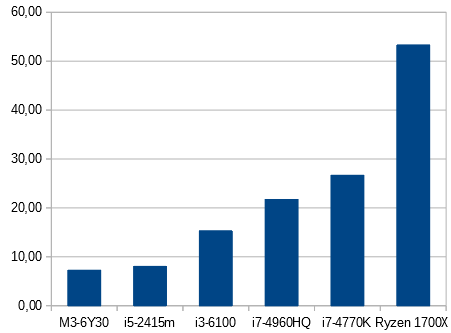