A year later, I have written an update about this game. You can read it here. Let's just say that I enjoy the game alot more.

All of below was based on a rushed experience. This game is meant to be enjoyed. Not rushed through.

For the first time, I can now show you all the gameplay this post is gonna be based on. This is the first game I recorded every second of gameplay, and then combined into one video and put on YouTube, so you can see what I am basing my claims on.

Here's a link to the playlist

When Nintendo says "forget everything you know about Zelda", they're not kidding.

The beginning of the game will get you very frustrated and you will hate the game. You wake up after sleeping 100 years and you have nothing. You go around picking up tree branches to use as weapons, then get your ass kicked by enemies and you die, die, die and die. Nothing feels like a Zelda game, apart from the little puzzles in the shrines. You are confused and not sure about anything you're doing.

That's how I felt the first time I played it. But after having seen some friends play through the intro, I actually don't mind the beginning parts anymore. It's actually a very good tutorial, preparing you for the rest of the game.

The game takes open world to an extreme. If you want to, you can go directly to the final boss, right from the start. The game is totally OK with it.

I'm actually wondering if Nintendo did it like this because of speedrunners. A normal player is not gonna stand a chance going into the ending without a lot of upgrades/help, but a speedrunner might. And if Nintendo would try to block speedrunners from doing it, speedrunners might eventually find a glitch to get around it. So it's like a win-win for everyone, except the glitch hunters who like hunting glitches.

Making a game extremely open world like this, makes the story of the game less important. It's a fine story, just the classic Nintendo story of their Mario games, but it's fine. It's not gonna get you emotionally involved or anything. The story isn't why you play this game. 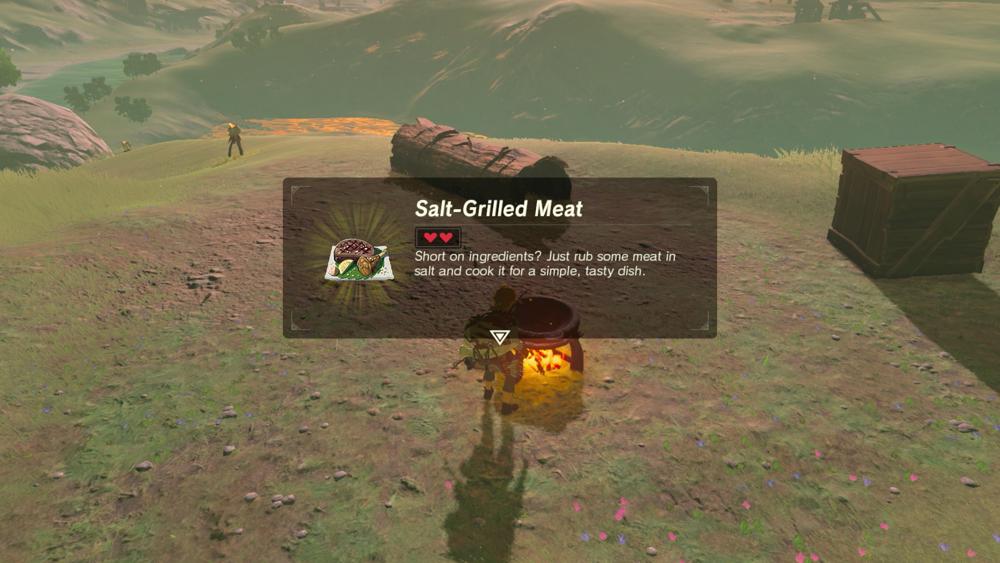 The reason you play this game is because it is incredibly fun. It's hard to pinpoint what exactly, but stuff like:

What I'm having trouble explaining is how massive this game is, and how many little details Nintendo thought of.

I played it for 30+ hours and I haven't found everything, not even close to it. I believe there are 900 Korok Seeds and 120 Shrines. I ended up with 47 Shrines and 27 Korok Seeds before going into the final boss, and you can see from the video length above how long I played it. Sure, my time may not have been the most productive time, but I'm guessing it would take me atleast 100 hours to find everything, but I'm even unsure about that because how am I gonna keep track of everything? 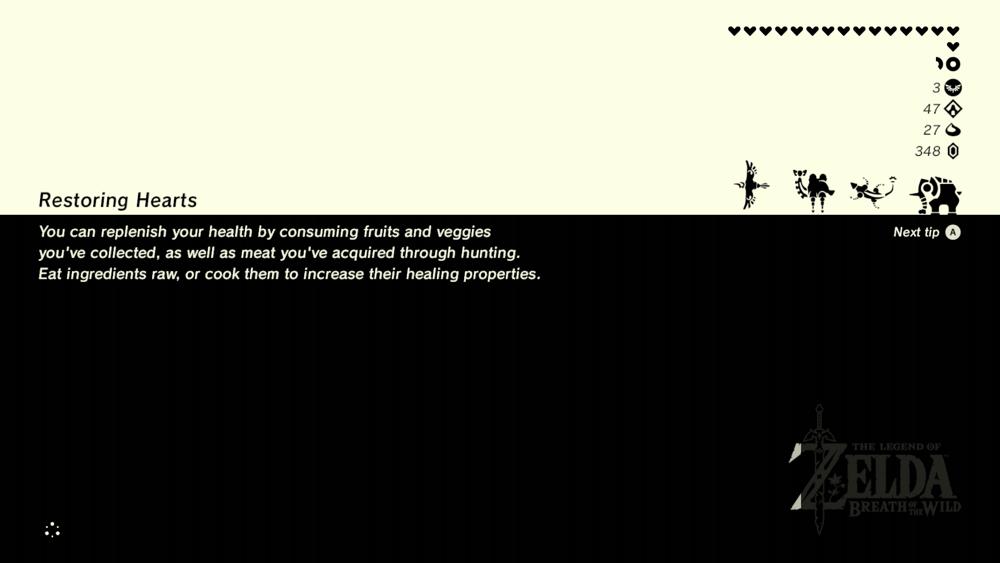 It's almost overwhelming how big the game is, and it caused me to stress out once, over how much I had left to do. And that's why it took me some time to beat it, I had to take some long breaks to clear my mind.

Then there are the little details that I just love, and float around on Twitter constantly. My two favorites are these:

And there are tons more. Maybe even some that people haven't discovered yet. 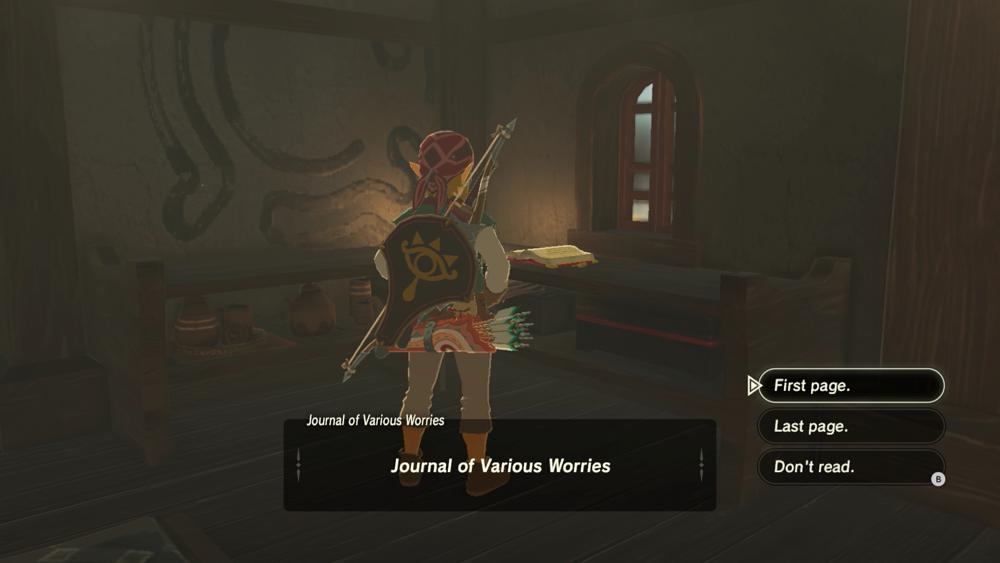 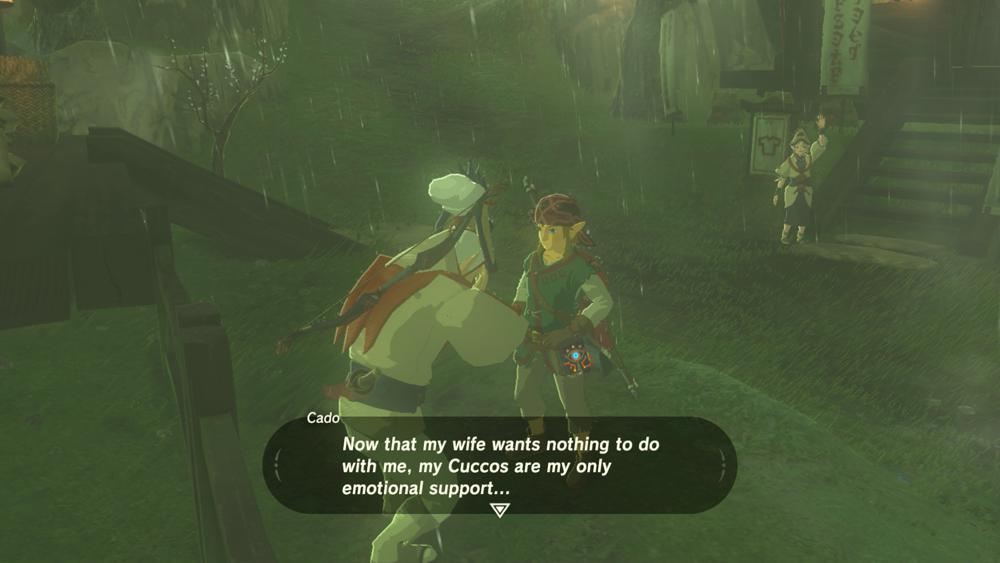 Plenty of me_irl material in this game

Wii U vs. Switch

Having played both versions, I don't think you need to get a Switch to enjoy this game. While i definitively prefer it on the Switch, due to a better controller and it being a little sharper, I actually like to think of it as a Wii U game. The game being only 900p on a new console is not very impressive, but if you think of it as a game for the Wii U, it is super impressive. 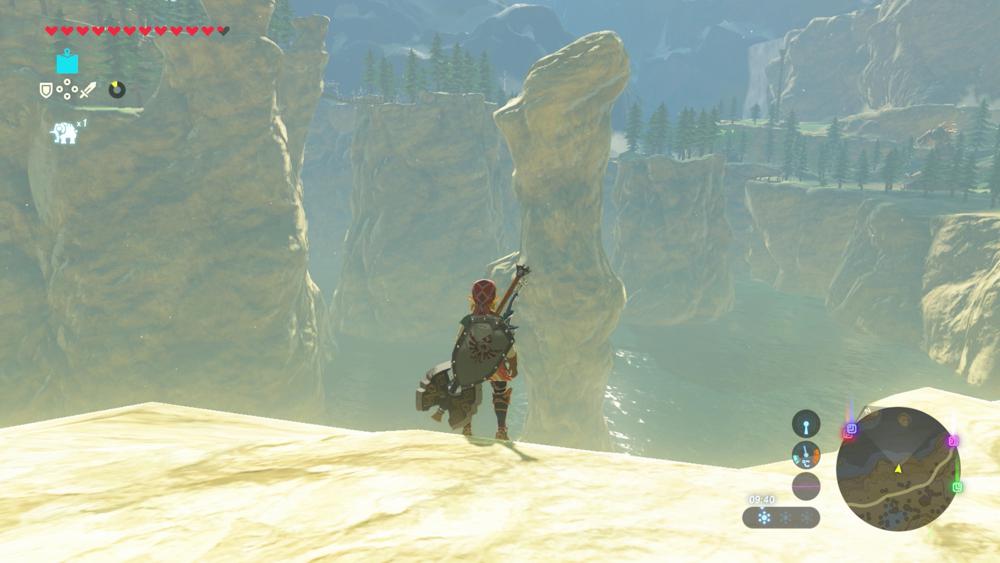 While this game may not be impressive from a techinal standpoint for being on a new console, it's still very pretty

Another thing I don't understand is how the game is just around 11 GB. I mean the world is huge and there is stuff everywhere. I guess it's because not every thing is voice acted (thank god) and the textures are reused and not very high resolution.

I know this game has gotten 10/10 from pretty much everyone, and the game does deserve that, but there are quite a few things about it that I find very bad.

You cannot pin infinite things on your map. You can stamp seemingly infinite amounts, but I want pins so I can just look at the minimap and see what direction to run in. I hate placing them all, then wanting to place a new pin, and then having to remove an old one and trying to remember what that old pin was so I can convert it into a suitable stamp icon.

Despite playing the game for 30+ hours, I still had trouble with the map/menu buttons. The Map is on the - button, and the Inventory/Equipment/System Menu is on the + button. What confuses me to no end, is that the Adventure Log is on the + menu. I think it would make much more sense on the - menu, as the map is there. And when I get into combat and I wanna swap some weapon, and I hit start and see adventure log, I get confused and exit out of there again, and hit the same + button again, only to get the same screen again and then realizing I am just on the wrong tab of it. If they just moved the adventure log tab to the - menu, it would be fine.

There are some motion controlled puzzles. I've only encountered 3 I think, or maybe 2, but they are terrible. I played this game with my Switch Pro Controller, which is a fine controller, but then I get to a puzzle where I have to start awkwardly moving the controller with no precision at all, and I just end up frustrated at the puzzle.

There was also another puzzle where you had to shoot a ball across a hole, but there was no way to precisely aim it. You basically had to just jump into a spot and start building up energy and hope for the best. That was also really frustrating.

Speaking of frustration, one thing that really grinds my gears, is that you can be completely filled up on 15 hearts, and some enemy randomly comes and just does one hit on you and kills you instantly. What you need to get into your head is that this game is not easy, and you need to be more respectful of the enemies. Fortunately, the game is very generous with auto saves, and if you want to you can also just save the game manually almost any time you want.

The game is very quiet. There is barely any music. There are music sometimes, like when in towns, in dungeons, in shrines, in boss battles, but for the most part when you're running around in the world there isn't, and it's very dull. Some people like to compare this game to the first, original Legend of Zelda game, but even that game constantly had music running, except in lairs where you bought items/got items from the old man. Also the shrine music (listen at your own risk) makes me want to tear my ears out, it's really ear screeching and horrible.

And finally, the framerate. For the most part the game runs at a rock solid 30 fps, but in some areas and in some camera angles, the game drops hard and you can really feel it. I don't really need to explain it, you can watch one of Digital Foundry's many videos on the topic. While the huge drops are annoying, it's far from a deal breaker. I also had some really weird issue with the Switch version where the game completely locked up for 1-2 seconds and then continued like normal. It happened a couple of times (feel free to count them in my full playthrough video above.)

While the game is super fun and feels like 10/10 at many parts of it, the issues and the fact that I burned out on it makes me not feel confident in giving it a 10/10. I feel much more comfortable with giving it 9/10. It's on par with games like Uncharted 4, but not games like Final Fantasy XV.

I think if it wasn't for the Switch, with it being a new Nintendo console and Breath of the Wild being like the only game available on it on launch (apart from that other really cool game), I would've dropped it. I pushed through it to see what all the fuzz was about and to play the Switch, and I am glad that I did, because I am very happy to have beaten it and been part of this adventure. But I don't think I will replay it in a long time, and I don't have any motivation to go back to it and collect some more stuff.

While I don't like to think of Breath of the Wild as a Zelda game, but if I had to place it out between the other Zelda games: it's my third favorite Zelda game.

I know people are saying right now that Breath of the Wild is the best Zelda game ever. But I wonder if they will say that in 10 years when I will still say that Ocarina of Time is the best game ever made.

With that said, Breath of the Wild is still a must buy and must play if you have the chance. It plays like no other game I have played and I think anyone can get into it. It's one of the most unique gaming experiences I've had.