Since I posted some thoughts about that Razer laptop yesterday (well, last night) I guess I should do some thoughts on the christmas gift I got for myself aswell.

Simply put, this is an amazing laptop. And that's what you should expect when you pay a lot of cash for a laptop made by Apple, even if it's 3 years old.

Specs wise I am very happy with it. Video transcodes are fast enough and I can even do some light gaming. Hell, even GTA V ran OK. I was running it at 60 fps with medium settings at 720p, until it thermal throttled (or something similar, FPS started jumping between 30 and 60 all of a sudden.) 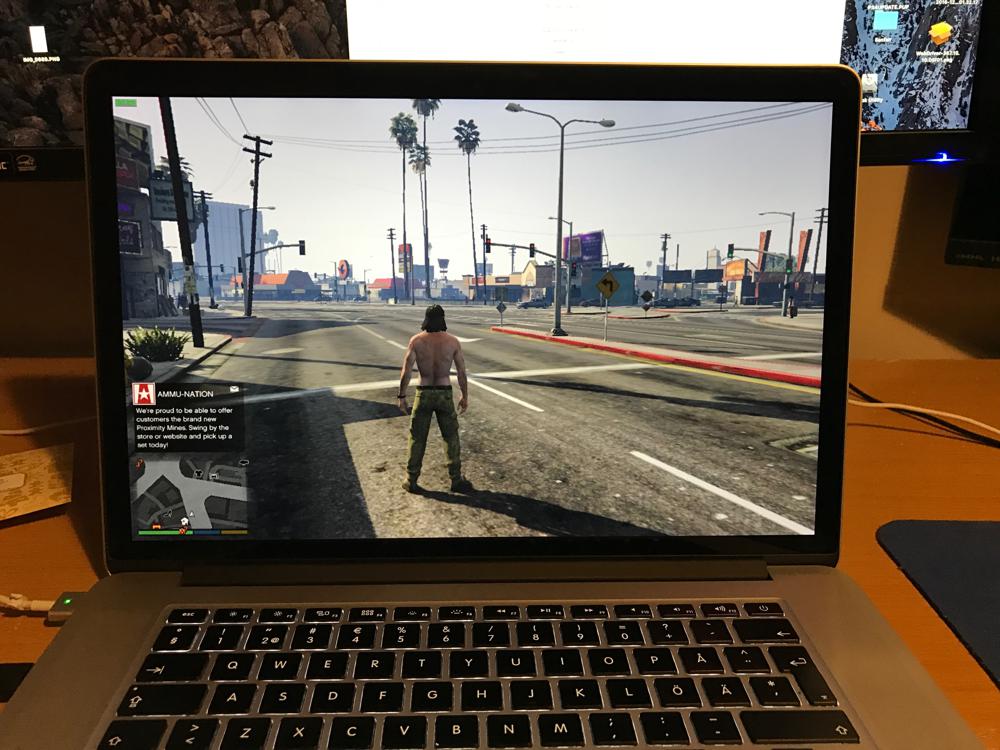 Notice that it says 60 FPS in the corner

The display is awesome too. I initally wrote that Retina ruined all other screens for me, which is part true. The monitor I use for my PC, a 27" 1440p display, is so far back/far away from me that it doesn't really bother me there. But for instance the 1366x768 panel that was on my old 13" laptop now looks unusable.

Initially I didn't wanna run the display at the native 2x resolution (2880x1800, 1440x900 effectively). It looked way too comically big. However, this is actually the resolution I am using it in right now, writing this while lying in bed. I call it my bed resolution. If I use the computer at a desk I run it at the 1920x1200 mode which makes everything very tiny and I have to be kinda close to see everything properly. While I can also use that resolution in bed, it's a tad too hard on the eyes when you are laid back and just wanna chill.

I don't like the 1680x1050 mode though. That was actually the first mode I settled on when I got the computer now but I can't really use it now. It's like not good for anything and the text looks slightly blurry with it. In both 1440x900 and 1920x1200 I find the text crisp.

Keyboard is fine. I hit 160 WPM with it on TypeRacer. The trackpad is nice and responsive, and very clicky too. Very satisfying.

Will it replace my Desktop computer? Unfortunately no. As much as I would like to, it's just not practical today. My desktop PC is so much better at so many things: playing games (I've gone back to the PC Master Race), streaming, recording, transcoding videos, not thermal throttling, file manipulation over the network, etc.

I will just keep using this rMBP as a laptop. A very overpriced and awesome laptop.