I feel like writing right now (love clicking and clacking on my IBM Model M), so here is a grab bag of random things I want to write about right now.

The title for this post is from Hypercritical episode 82. They were discussing John Siracusa's OSX Mountain Lion Review, in which he had a section called Grab Bag where he put stuff that wouldn't fit anywhere else in his review. I listened to this episode today at work [1].

Whenever something isn't right at my computer, a application freezes or a folder shows up empty, I start singing the "Hello, hello, hello, hello" part from Nirvana - Smells Like Teen Spirit in my head. It happened just now because the files from my NAS Dump folder (basically where all Downloads go before they are sorted) don't show up in the Windows Explorer

The iPhone 6S seems nice. I read John Gruber's review of it and it seems like a really cool phone. Sadly, I don't really have any good reasons to get one as my iPhone 6 Plus is perfectly fine and I have it on a 2 year contract (only another year to go!) This does impose a problem on me though. The next year, when my contract expires I'm probably gonna get a new phone, and the new iPhone then is gonna be the iPhone 7. As Gruber mentions in his review, the non-S phones show the new design, while the S-phones improve everything about the internals. I have always known this, but I now regret getting my 6 Plus when I did (when it was brand new). I got it then because the iPhone 5 I had at the time had terrible battery life and I had worked (at the same place as above), so I figured I'd treat myself a little something.

While writing this I'm listening to music on my own initiative (what I mean by that is that I selected a song and hit Play) and it's been 15 days since last time according to my Last.fm. 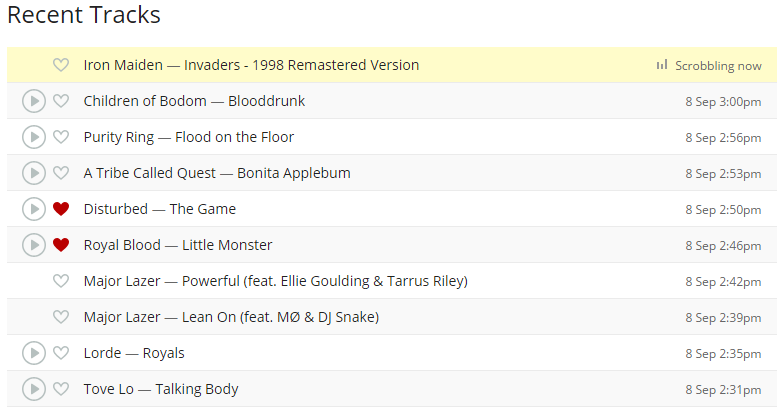 This means that I really shouldn't subscribe to Apple Music or Spotify. I don't listen to music enough. I find podcasts alot more suitable to listen to while working. I'm gonna have to figure something out, because I really like being able to think of any song and just being a few taps away from playing it in Spotify (or a few words if I'm using Apple Music + Siri.)

Two and a Half Men

Rewatching this show currently (the Charlie seasons only ofcourse [3]). This is probably somewhere between the 10 and 20th time I'm rewatching this show. Before I got into bulking TV shows digitally, all I had was these burned DVD discs of this show and I watched them in my Xbox 360, over and over and over. From that I know pretty much every episode inside out and I know what each character is about to say. But that's fine, I still love it.

I should sometime write about me and rewatching TV shows. I pretty much only watch TV shows (and movies) that I have already seen.

Neutral: - No Windows key. When gaming this is a pro. When I want to open the Start Menu to search it's a con.

Cons: - PS/2 connector (complicates when Hackintoshing) - Loud. It sounds better than MX Blue's though. - Limited KRO. I haven't ran into this yet, but I know that I sometime will and it's gonna bug me.