It's fair to say I haven't really played this game until now. Yeah I played it 10 years ago or whatever, but I didn't really understand it and so I've grown this mindset about it where I completely underestimated it. I cannot imagine how insane it must've been if you played it when it was new. I feel like if I had (and I wasn't 1 year old) I could've played this game for like 5 years before getting a new game.

But, I don't have the attention span for 5 years anymore. If I can focus on one game for a week that's insanely good for me, so that's why I've put a little asterisk in the title there: I used cheats. Kinda. Or yeah, I did.

Basically, the PS4 version (and the Xbox One and Switch versions too I believe) lets you toggle god mode and X3 speed and no encounters by the push of a button. It's like they want you to do it.

I first started playing the original copy I have on a PS2. This was shortly after finishing TLOU2. I started playing and was just blown away over how good the music was and how cool it was. I played through the opening reactor section and I was gonna continue. 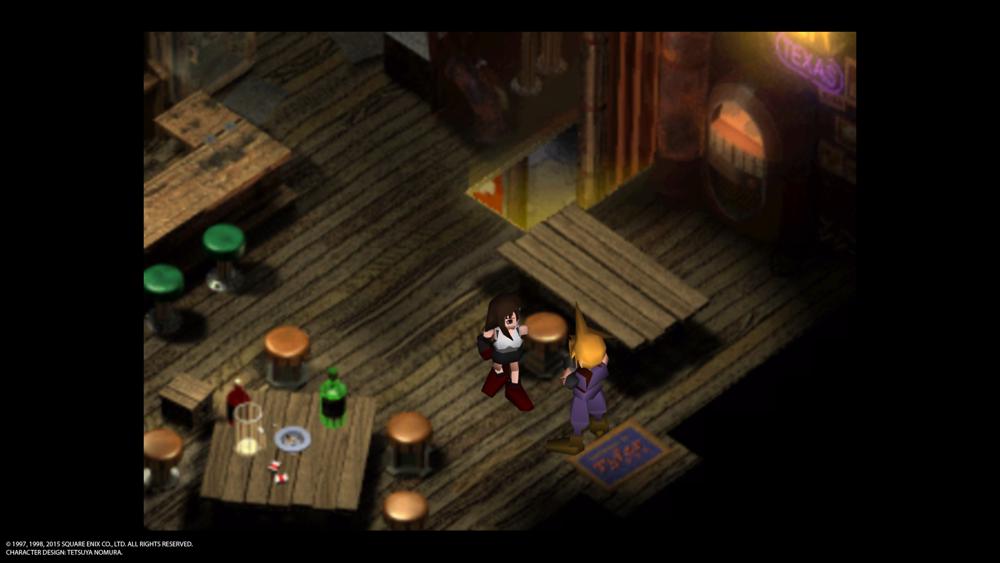 But my desk looked so messy with the PS2, the disc drive was making a kinda bad sound and annoying stuff like that, so I decided I'm just gonna play it on my PS4 instead. Since this is a long game it's kinda nice to have save files backed up instead of relying on old PS1 memory cards.

So I got it there, started playing it, and discovered these "cheats". And at first I was very hesitant. Like, do I really wanna go down this road? But I figured, eh, I'll just use them for this opening part I just played legit on real hardware. I'll just X3 Speed and God Mode so I'll get through this intro quicky.

But shortly after I had done the intro I decided: screw it, I'll just use all the cheats for the entire game.

I am here to play the original game so I know what to expect in the Remake, and understand the story better, and hear the music and see the scenery and experience the different areas of the game.

I am not here to grind materia, figure out strategies and read up on boss weaknesses. I am not in that mood.

So I used the cheats, and even then, this game is massive. It's enormous. It took me about 25 hours with X3 Speed on for the most part. So would've that been like 75 hours without it? I don't think I would've bothered with that.

So I recommend the cheats and highly recommend you use them too. If you wanna be super legit, maybe even play on a real copy, do that. That's really cool. I might eventually some day do that, but I highly doubt it. The game is somewhat linear though so I could maybe do it. Maybe.

It's worth noting the PS4 does not block any trophies for using the cheats... as I said, It's like they want you to use them.

It's also worth noting you can still die with the God Mode on. If an enemy is strong enough to 1 hit you it will and you will die, so you still have to get decent weapons and armors and have a lot of HP. That's enough challenge for me with this playthrough.

Another thing worth noting is that X3 speed only speeds up gameplay. It does not speed up the music. If it did it I probably wouldn't have used it. The way they've done it here is actually really great. They also automatically disable it for some stuff, like menu's and FMV's.

Let's get to talking about the game.

It's fair to say I never understood any of this when I first played this part 10 years ago or whatever. I don't think I was old enough to understand what the hell was going on.

Playing the Midgar section, i.e. the Remake section, was magical. Truly magical. I thought it was beautiful. Even though they were terrible 3D PS1 polygons, I read their text boxes in their Remake voices.

And it was so cool to recognise all the scenes I had just gone through in the Remake. 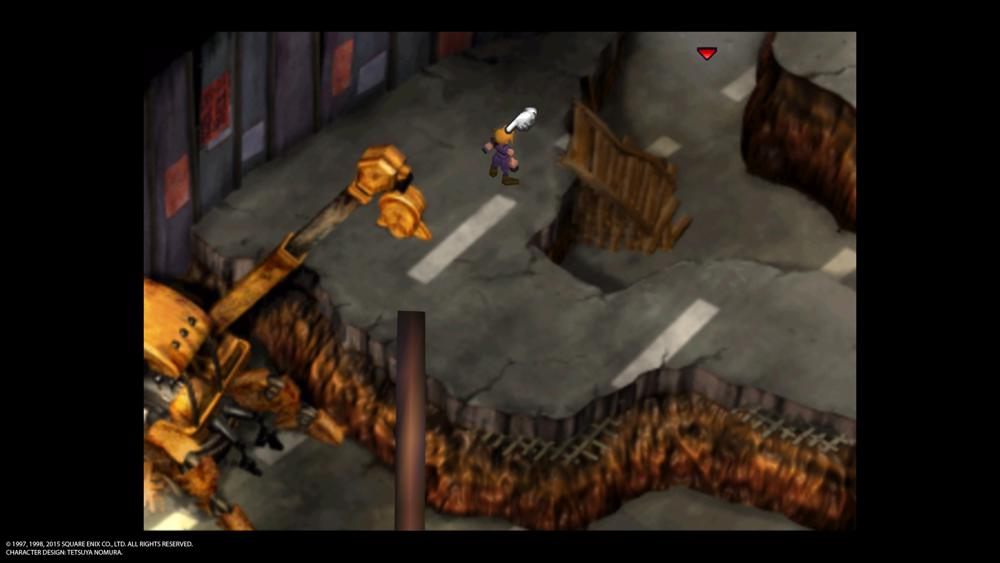 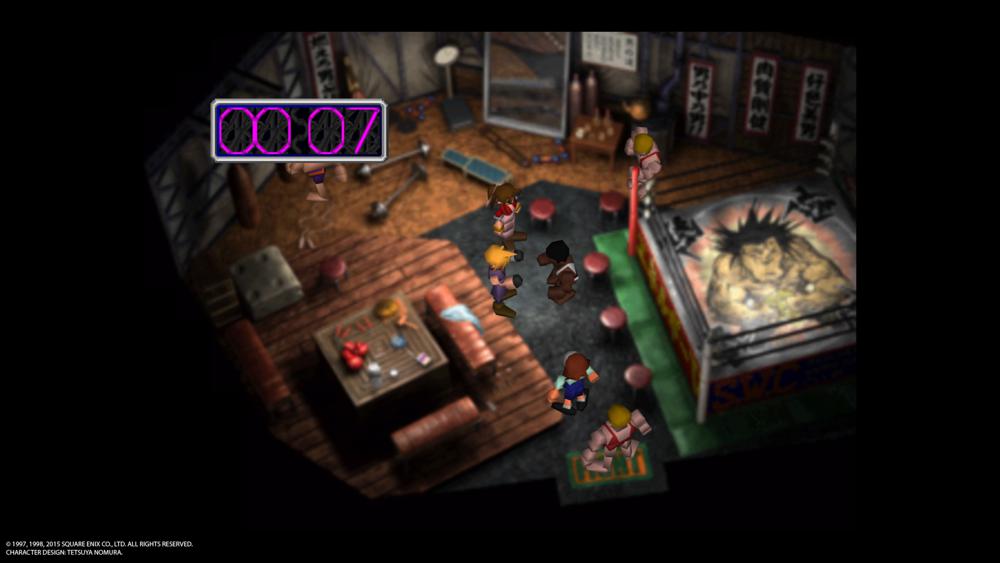 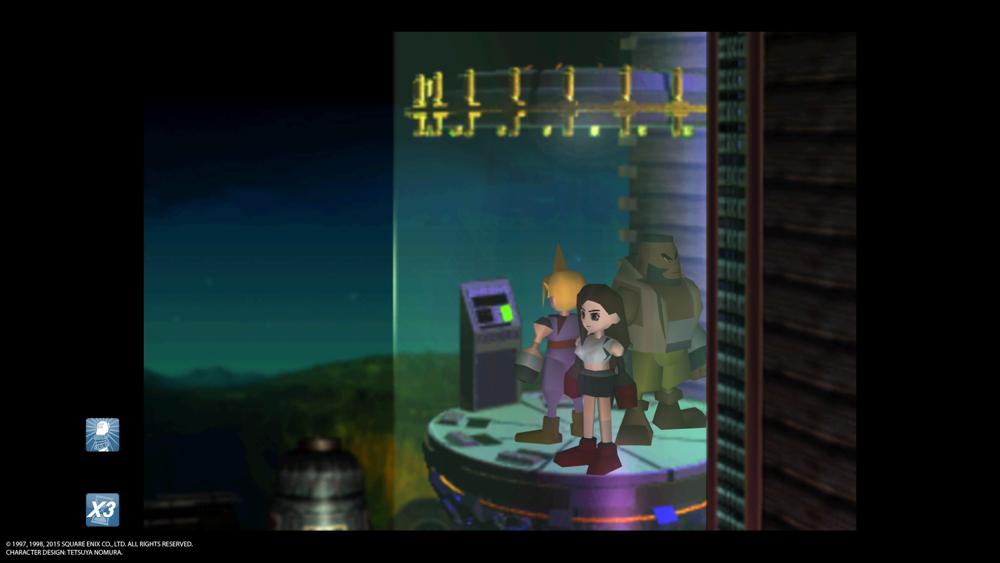 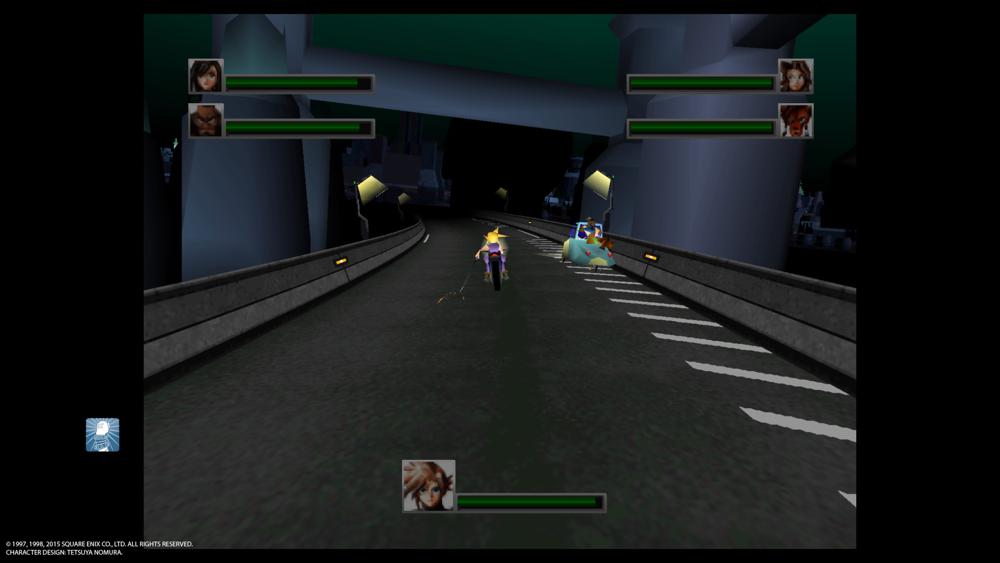 It actually helped a lot because it was easier to understand. Having seen Clouds flashbacks in the Remake made it easier for me to see them here. I'm not sure I would've understood they were flashbacks and other mental trouble otherwise.

And before I knew it, I was out of Midgar and the Remake section was over! It's amazing how much they expanded this little snippet of the game for the Remake.

I think it took me 4 hours in this original version (with cheats). The Remake took 30 hours. If they do that kind of expansion for the whole game then... oh boy.

Getting past the Remake segment I started getting this dread over me.

I knew what was coming.

I didn't know when, but I know it's somewhere between now and the middle of the game a certain character I am in love with in the Remake dies.

Eventually I got to that part and I knew it was time. But when I got there, my dread had somewhat lifted. I actually kinda forgot about her for a while, because there are a ton of other characters in your party and other things going on. And she isn't as intimate here as she is in the Remake. That's probably just a limitation of the medium.

It happened and I almost did it, I almost cried. Seeing the poor 3D polygon getting impaled wasn't the hard part, but the damn music that starts when the materia hits the floor... it almost happened. Just sitting here writing about it and thinking about that one beat makes me almost cry. Despite the FMV artifacts and the pathetic 3D models, it's really beautiful. I gotta give props to them, had I seen this in 1997 without knowing it prior I would've been shocked.

I just... I don't know if I can go through with it in the Remake. It's gonna be hard. I am not looking forward to it, at all. And I feel like they have to do it. While the Remake story is "untold", I feel like her death is so legendary it has to be done.

Interestingly, after she was gone, the dread completely lifted from me and I was able to focus more on the game again. Hopefully that'll happen with the Remake too.

I don't really know if I need to go on much more past that. I mean everyone has played this game it seems. I was able to Google pretty much any obscure question I had while playing and sure enough someone else had asked it in this 23 year time span.

And I can see why, it's pretty incredible how huge it is and how much there is to do. I thought it was much shorter and simpler but it is way longer and more complex.

Before I played through this game entirely myself the game was basically: 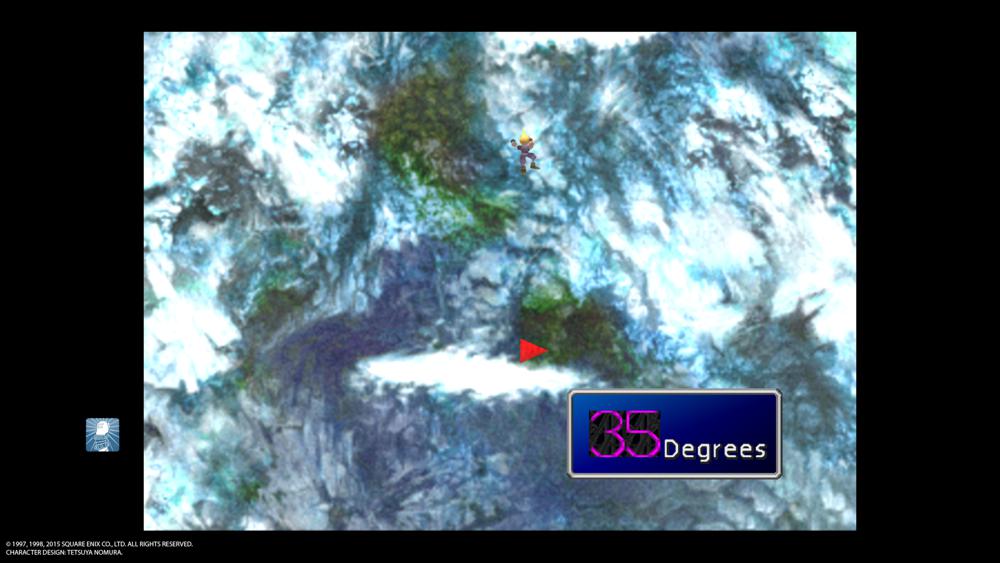 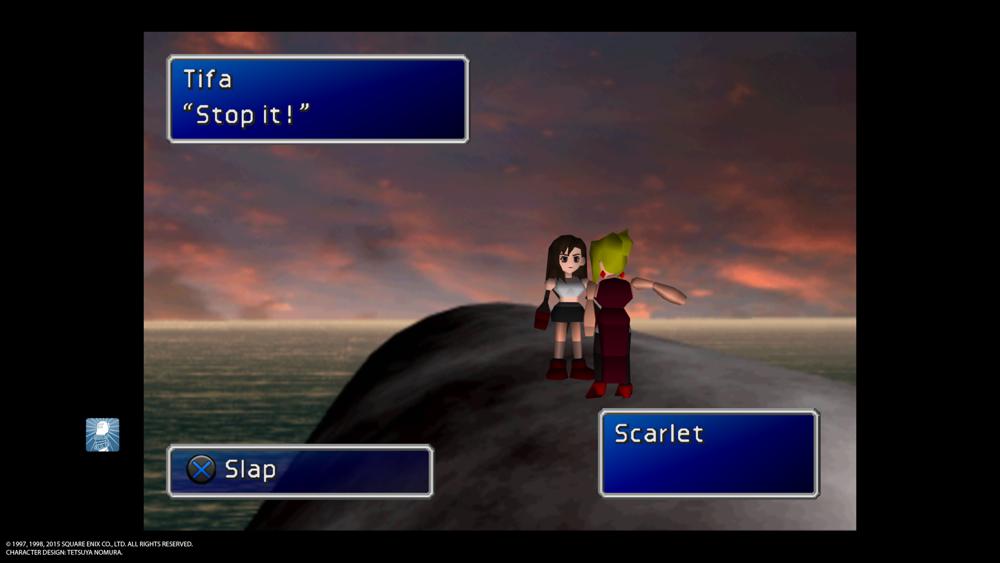 There's so much stuff I had no idea about and that is why I wanted to play the game for myself.

And I still haven't done everything. I haven't gotten Knights of the Round and a Gold Chocobo and some other things. I might go back and do that.

I also have some minor nitpicks about the game. 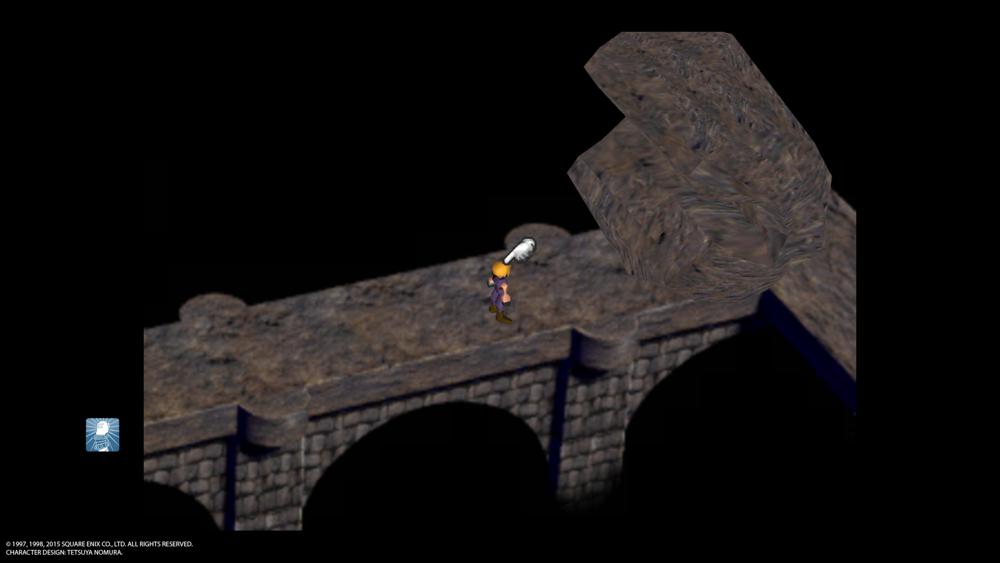 For the most part it holds up. It's really fun, especially with X3 Speed. Without it, some of the battles go on a little too long. But with it, the game is really fast and flows.

One thing that was a constant source of frustration was the pre-rendered backgrounds. It's not very clear where you should walk. Sometimes things that doesn't look like something you can walk on, you can walk on, and vice versa.

As I mentioned earlier (and as the game mentions) managing Materia is hell. This is probably gonna be the biggest friction if I'm gonna play it legit. I hated managing the Materia. The menus are so messy and you get lost in them. And if your character is not in your party, you cannot access their materia, so you can get screwed in some places. I feel like you need to follow a walkthrough so you don't get surprised. And even then there are still so many combinations you need to keep track of. 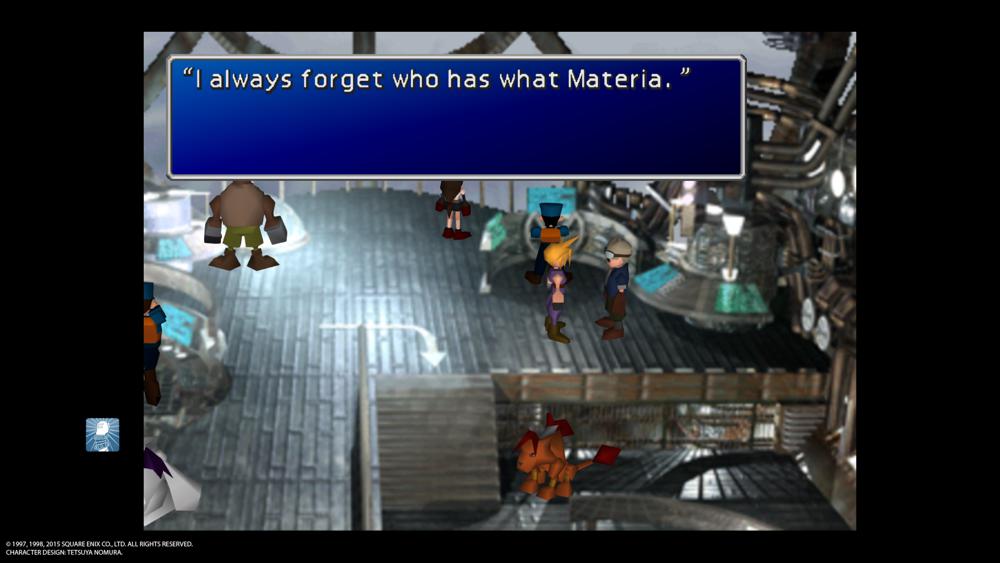 Some other stuff I didn't like was limitations of the medium, I suppose I'd call it. I can't recall where it was but there was some area where you were climbing on ladders and instead of just pressing which direction you wanted to go, a blue ugly menu popped up asking you where to go. Not very smooth. There was a couple more areas like that.

But other than that, this game is pretty much a masterpiece deserving of its status. It has a lot of charm and an amazing soundtrack and I totally get why everyone has played it.

Including me... even if it was with cheats.

But IDGAF because I got what I wanted and so much more. 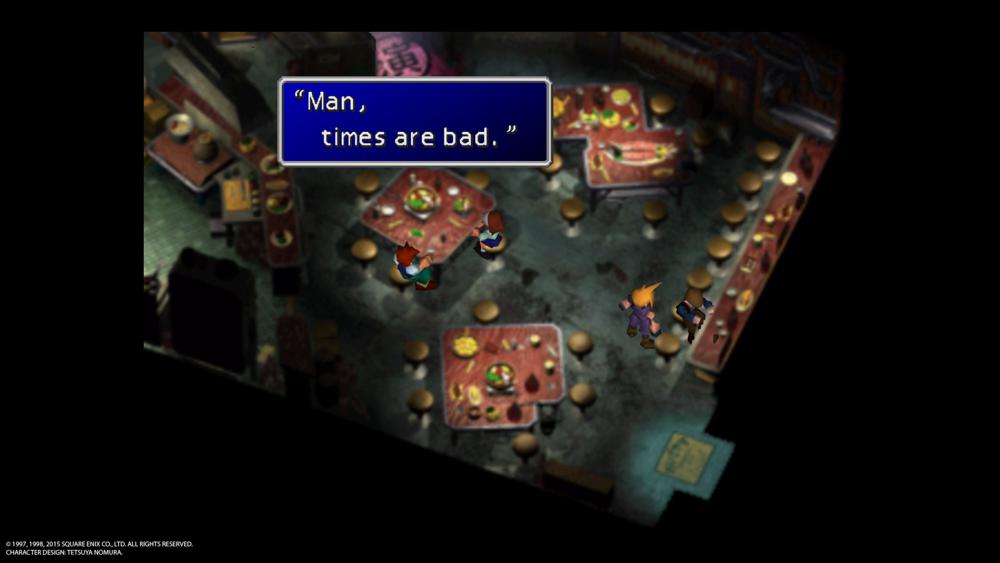