What an amazing game is all I have on top of my mind. I was expecting this game to be very cheesy and weird, based on what I saw on Twitter, and well, the whole friendship with your party is cheesy, but it is very fun.

But it is thanks to the people I follow on Twitter that I got this game. I had 0% interest in this game before it was released. When people started raving about it on Twitter, I got interested and decided that I would get it when I felt like it. 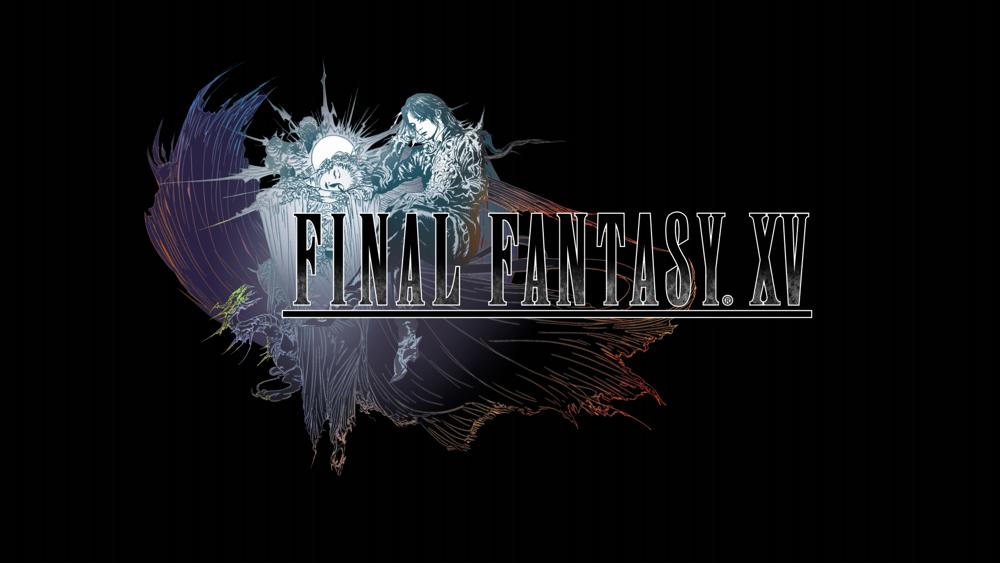 How this logo was made, is truly beautiful

This is the first Final Fantasy I have beaten, and it is probably a very odd one to start with, but don't worry - I know what the previous titles are like. I've played a lot of Final Fantasy VII (never beaten it though) and I have seen others play 6, 8 and 9. I have also played quite a bit of Final Fantasy XIII, but never beat that either.

Why didn't I beat those? Well, they didn't hook me. Final Fantasy XV I didn't have to play for long, and then I was hooked and couldn't stop playing it. In fact, I got the game on Monday, and worked the entire week, 8-9 hours/day, and Saturday night I beat it. Playing a game 24 hours in one working week is a lot for me, which would indicate that the game is very good as I wanted to play it so much.

The story of the game is pretty simple in concept. You're a prince, Noctis, and you're getting married to a princess, Lady Lunafreya, and stuff happens along the way. I'll leave it like that in case you wanna play this game. The basis of the story is very simple to understand, although later on it goes a bit weird and you might need to think a little more.

I didn't really get attached with the story, even during major "plot twists". But it was okay, no complaints really. The very ending of the game (after the credits) was very beautiful though, and I have to admit that it got to me.

The story of the game should be least of your concern anyway. What makes this game awesome is everything else: the gameplay, the music, the random dialogue, the things you can do and to some extent the visuals. 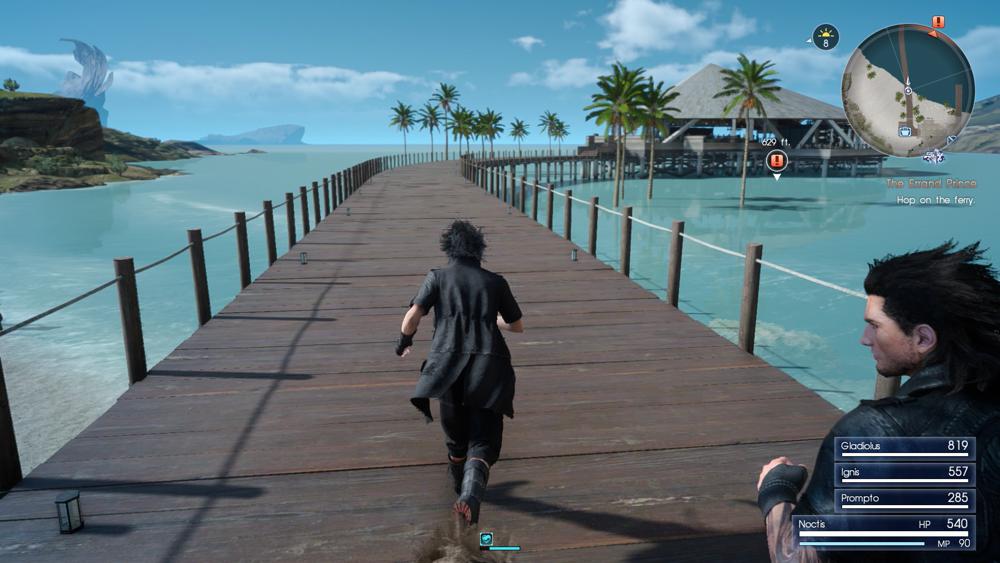 One of my favorite spots. Gets annoying walking back and forth here though.

The gameplay idea is like all other open-world RPGs. Get quests, do quests, turn in quests. The combat was a bit wonky at first for me, and I'm not really sure if I got it towards the end either, but I think I did well as I always got A+ on offense and usually the same score on time. On the "finesse" rating I didn't do very well though. Basically my tactic was to just attack constantly and try to block when it seemed appropriate and use a lot of potions. A lot of them. Doing this, the game turned pretty easy. I didn't even remember until after I beat it that I was playing it on Normal difficulty, and not Easy, because I got a trophy for playing it on Normal.

One thing I wanna note is that the game encourages you to use magic, Elemancy, but I never did. I used it for one boss where you had to throw fire on oil drums to make explosions, but other than that I never used them. I tried to use it on some bosses but it was just annoying to me so I just stuck to my sword.

The random dialogue is also fun. Just walk around a big town like Lestallum and listen to what everyone is talking about and you can keep yourself entertained. Very rarely I do that in video games. Ofcourse, there is also the infamous cup noodle conversation and even an entire quest devoted to getting the perfect cup noodles.

The things you can do is varied and fun. Getting through a dungeon fighting enemies is fun to grind. Upgrading your car and going on hunts is also fun. Coming up with new recipes and then eating them at camp is also fun. 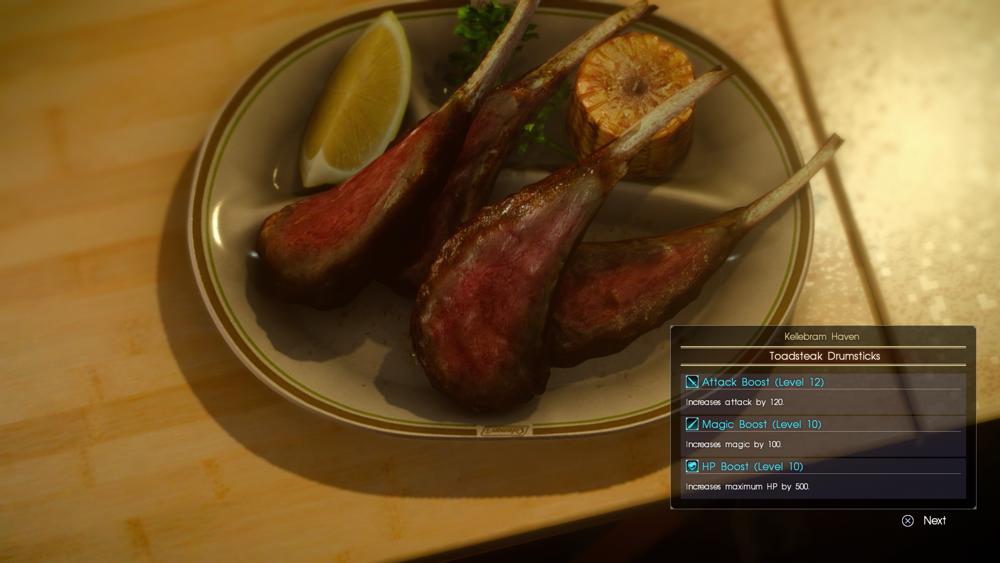 And then there is fishing too. This is probably the best fishing simulator I have played in any video game. 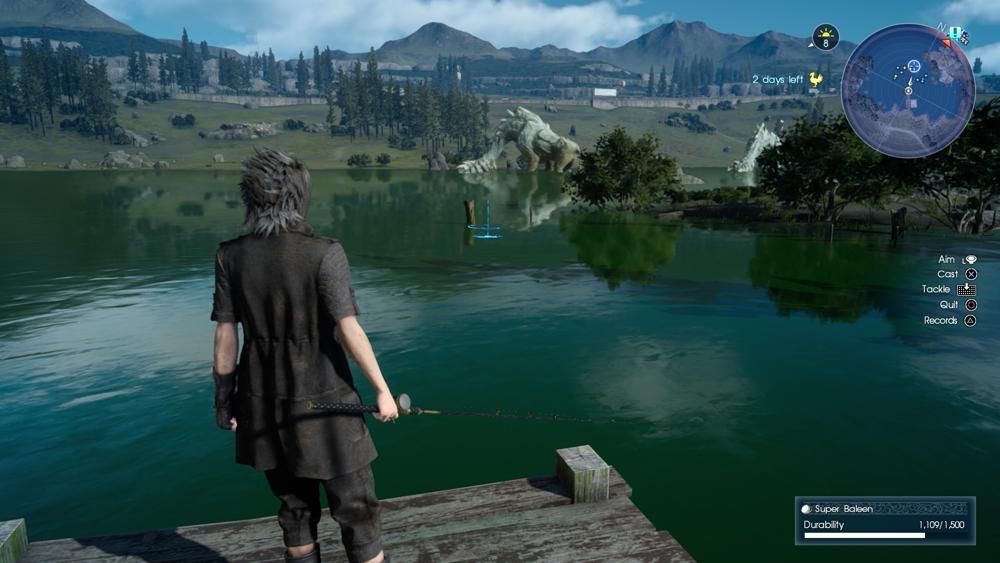 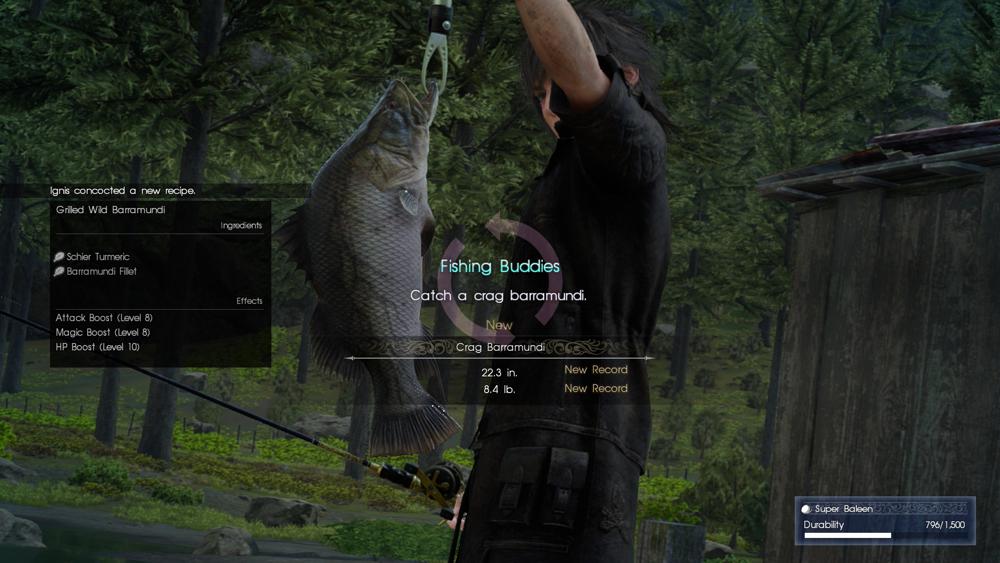 It's just that the game is so much fun overall that makes it a great game overall. Levelling up your character, getting new gear, spending your AP on abilities, talking to everyone, doing a bunch of quests... it's just fun.

The one department where I can complain about this game is on it's technical side. The visuals, while colorful and sparkly, looks nice. But sometimes they don't, especially if you get up close. Everything from textures not streaming in fast enough to very jaggy hair. 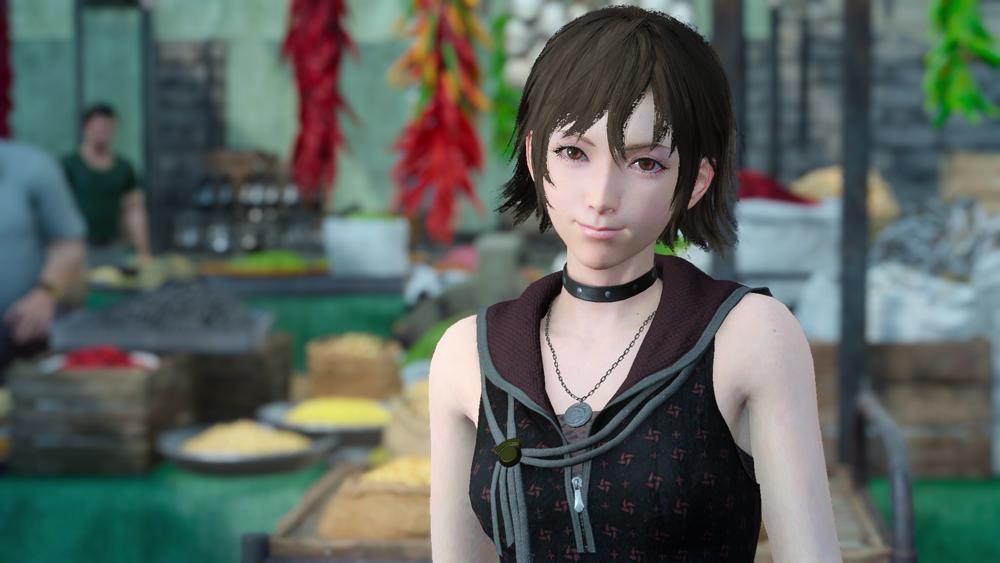 And then there are some bugs and glitches too, which shouldn't surprise anyone as this game is huge. 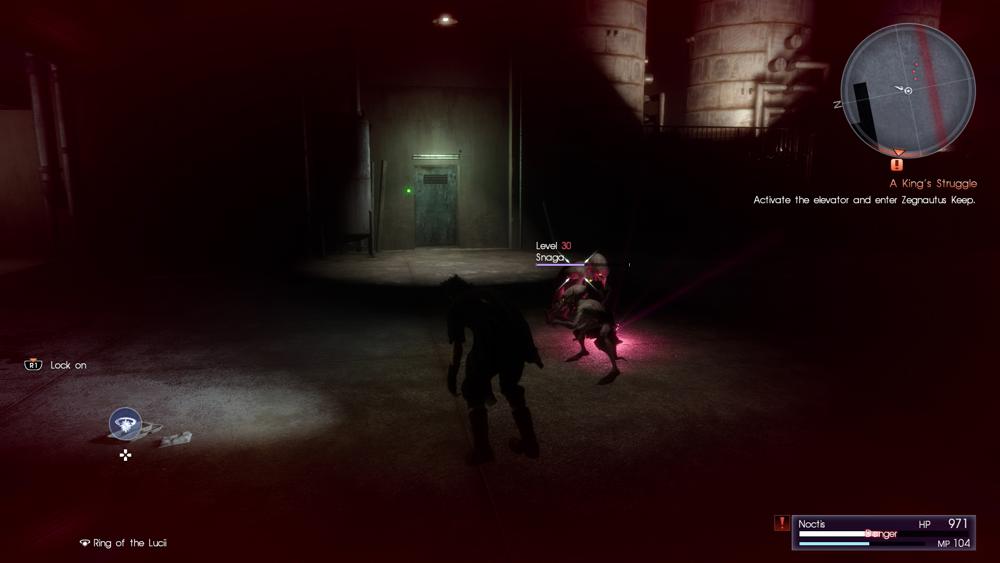 Notice how it says I'm in danger, even though I still have HP and is really not in danger

The framerate is also very questionable at some heavy scenes. You really notice the framedrops, let's put it like that. Apparently the PS4 version also suffers from some "frame pacing" issue, but I don't really know what that is and I don't think I notice it. Bloodborne also has the same problem apparently, but I haven't noticed it there either so I don't know.

This chapter is known to be very odd and sucky. And it kinda is, compared to the rest of the game, especially the earlier chapters, but it's not terrible in my opinion. It's just a bit slower and darker, it's nothing that makes you wanna drop the amazing game. If you're having trouble with it, here's my tip: roll around to move faster and never use the life drain attack (Circle button), instead just dodge at the right time to do that holy damage thing - made things a lot easier. 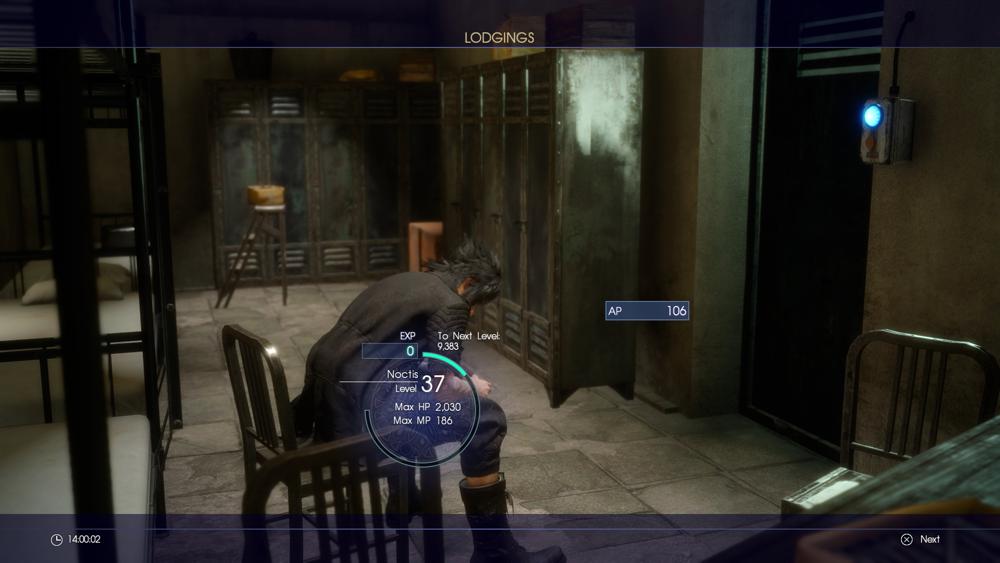 Chapter 13 in a nutshell

I wanna make a quick diversion here to talk about the final boss, no spoilers though. Basically, the boss is a bit disappointing when it comes to difficulty. As I said earlier, I found the combat in the game to be a bit wonky - you won't really game over as long as you have items. And the same applies here to the final boss, it's kind of easy and not any more difficult than any other enemy in the game. In fact, I would argue that the path leading up to the final boss was harder.

Based on what walkthroughs and such that I read up on before deciding whether to go in to the boss or not, said that I should level up quite a bit and buy quite a bit of items to be prepared, but I'm not sure if I really needed to do that. I think I could've done it without the grinding. 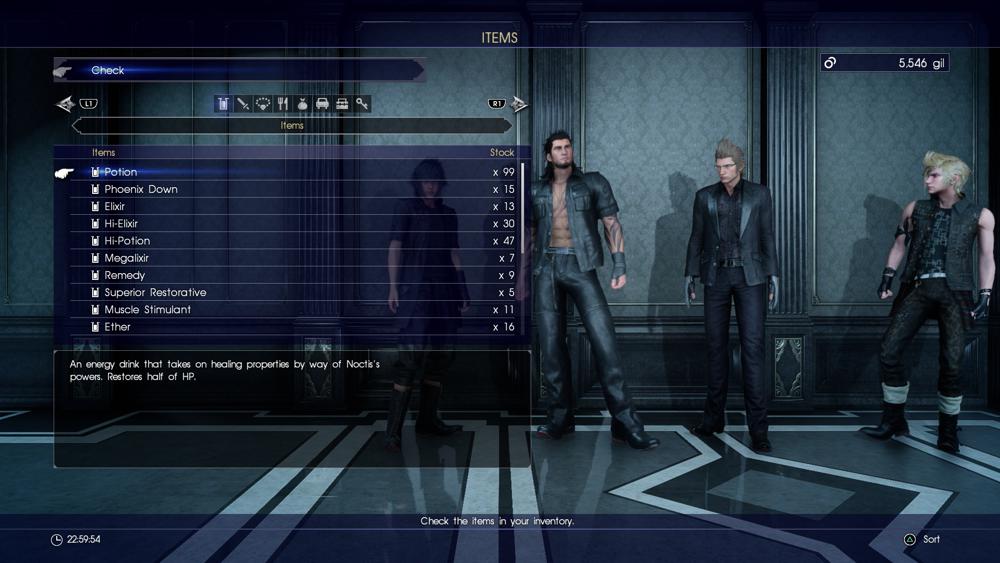 Final Fantasy XV is a solid 5/5 for me. The last time I was this glued to a game was probably when GTA V first came out for the PS3. I very rarely sit an entire Saturday playing one game non-stop, but FFXV and GTA V are games that I have done this with.

(Terranigma I was also hooked on, but not this much. That game I played for a few hours here and there, no long sessions.) 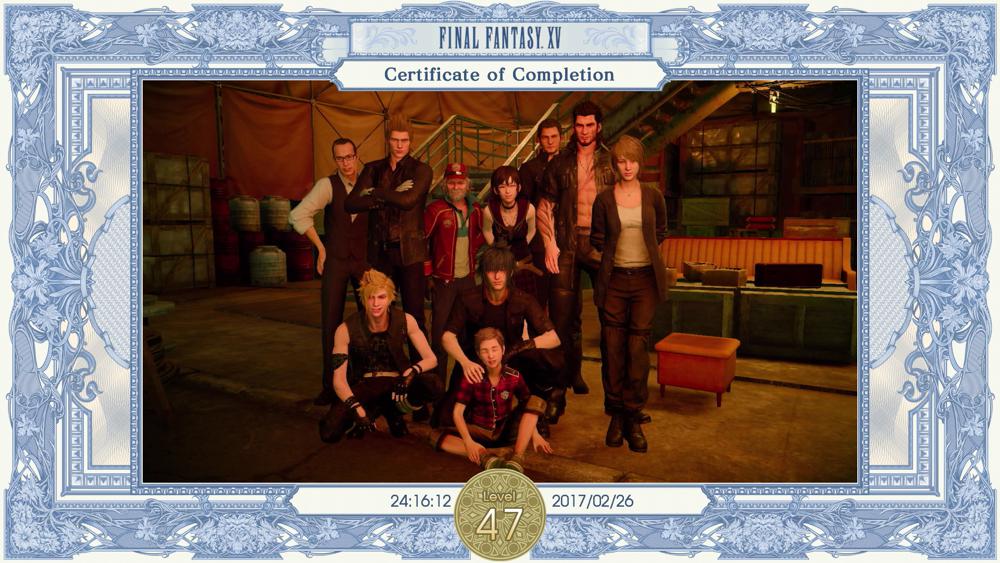 I guess this is how speedruns get their time?