Why I Copied 16 TB of Data This Weekend

Prior to this weekend, my setup looked like this: 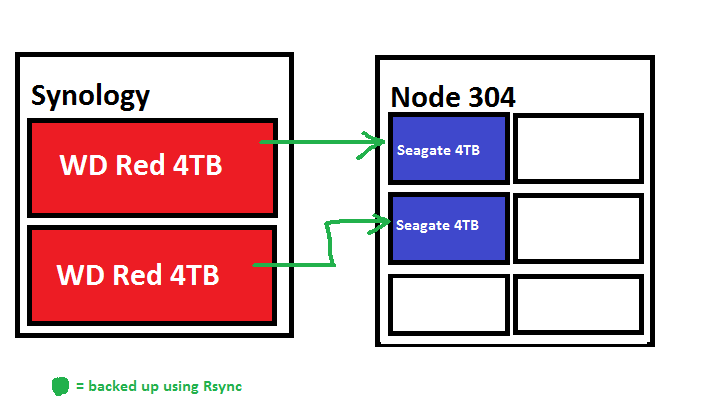 This was fine, but it wasn't good for the future. What happens when the disks in the Synology fill up? Am I gonna start putting Media on WD Red drives inside my Node 304 1 and have Media files on both my Synology and my Node 304? Yeah, that could work, but it would get messy.

So here's what I changed it to, and what I am currently running:

This has a couple of issues:

Here's what I'm hoping it will look like next week, when all the parts I need have arrived:

This is pretty good and works pretty good for a while. If I add a disk to the Node 304, I can add another, same size, to the Crappy Backup computer and just backup there. The Robocopy would be triggered manually, on my command, maybe once a week. New TV Shows and such usually come out on a weekly basis.

The downside of this is that this crappy PC Backup-target is kind of crappy. It's loud and big. And runs Windows. While I kind of enjoy using Windows on my Node 304 box (the Plex server), it feels bad. There's some bad stigma about running Windows on a server that I cannot shake.

You might be wondering why I don't just put all the 4 TB drives in the one Node 304 and just backup between them internally? I would love to do this, it would be faster and easier and less messy, but, what if the PSU decides to send a huge surge to all the drives? Then both my "live drives" and the backups are dead. This is why I want the backups to be external. Either USB drives or another computer. I don't want 1 PSU to ruin my whole life.

Ideally I'd also have an outside backup, like at another house or something like Backblaze. I haven't found a good way to do this though. Backblaze seems really good but I don't really feel comfortable sending 8 TB of consumable media to them.

Now this is a pretty ridiculous setup. Buying an additional eight 4TB HDD's is not cheap.

I could also just make my current Node 304 into a file server, and run RAID 5, or maybe RAID 10 on it for extra safety, and start using my old Mac Mini as my Plex server again. I need to get some hard drives though that can temporarily hold the 8 TB of data I currently have.

Well I haven't settled for anything yet, and that's why I wanted to move these 16 TB of data around this weekend: I don't have to care about where the Synology user data is anymore. The Synology is self contained and I can freely move my 4 TB Drives around without worrying about my brothers wedding photos disappearing.

Migrating to smaller Hard Drives in a Synology

I created a Reddit thread to ask about how to do this properly, but I'll summarize it here now that I have done it and I can confirm it works:

Now, there are some caveats with the configuration it doesn't backup all of your settings. Here's what I have noticed it didn't restore and I had to re-set myself: - UPS Settings - Notification Settings - Admin 2FA - User individual Photo Station (the photos are still there, just need to re-enable for each user) - DDNS (Outside Access settings)

Doing this, I successfully moved all my home folders from a 4 TB drive, to a 1 TB drive