With the Nintendo Switch coming out, and me being mostly a console gamer nowadays, I started thinking about my Top 5 Game Consoles, and what makes them that. 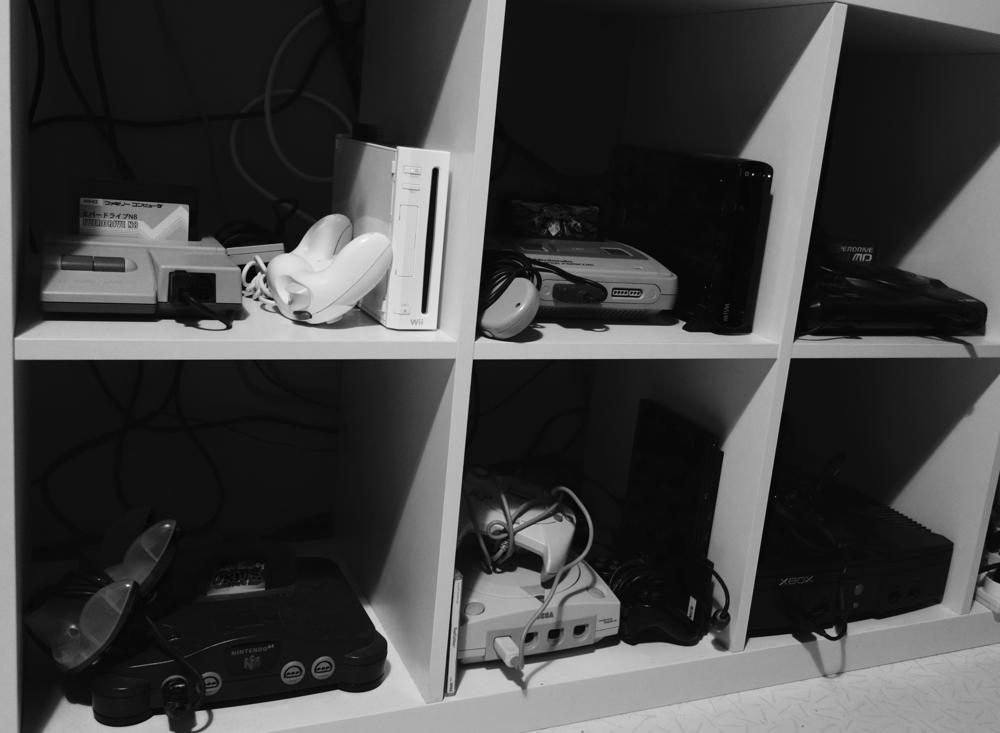 I quickly came to a conclusion: I have to make two separate Top 5 lists.

Top 5 Consoles for a Deserted Island

One is for the consoles I would bring to a deserted island, in order of preference. These are consoles that should be reliable and should have a lot of fun games. I think of it as an objective list.

Putting the Wii at #1 is a very easy decision: it's a tiny console that plays games for Wii, GC, NES, SNES, N64, Genesis, Turbografx 16 and probably some other console that I'm forgetting as it has a very big Virtual Console selection. In my experience it's also very relaible - my day 1 console still works 100%.

The PS2 has an enormous library that will cover you in a variety of genres. You got the good GTA games, the Final Fantasies and the Guitar Heroes. You can also play every PS1 game so that gives you even more of a selection. The PS2 is also a reliable console in my experience, atleast the Slim model is. I've never had a Dualshock 2 controller break either.

The Xbox 360 is pretty much the same as PS2, but it covers the newer generation. You get your Halo, Gears of War, GTA 4 and 5, and all the other games that was released that generation.

The N64 and PS4 shouldn't really be in the list. The list would be sufficient at 3 entries, but as it is a Top 5 I had to fill it out. The N64 has few games that are worth playing that aren't on the Wii (Goldeneye, Banjo-Kazooie, and to a lesser degree: Conker and Donkey Kong 64). The controllers also break easily. The PS4 probably wouldn't work at all on a deserted island as it would require a bunch of updates.

This list is very different from the one above. These are consoles that I have had most fun with or I just find fascinating in general.

N64 was my childhood console and I have played it all my life. It has 3 of my Top 5 games of all time: Ocarina of Time, Mario 64 and Goldeneye. I can be in the mood to play N64 pretty much any day. I don't need to go into more detail.

The PS4 was an unexpected love for me. Before I got it I got a Xbox One, and that was only because my friend had one. I always knew PS4 was the better console and it was the one I really wanted. Once I got it, I quickly fell in love with the controller and the operating system. Both are my favorite in their separate category. The PS4 controller is my favorite controller ever, and the PS4 OS is my favorite operating system for a game console ever. I've also had a lot of fun playing games on it. Sure, most of them are multiplats and are objectively better on PC, but I've had more fun playing them on the PS4. The Phantom Pain was the first game I got (as I have the MGSV edition PS4) and I managed to beat it after many ifs and buts. Then I got Destiny for the third time and had the best experience you can have with it. Bloodborne was a game that I was afraid of getting as I was skeptical if I could ever beat it, but I did and I look back at it with fond memories. Every time I am pressing the R1 button repeatedly in some other game I am reminded of the aggressive fighting you needed to succeed in Bloodborne. Uncharted 4, the best graphics of any game I have ever played blew me away with it's terrific gameplay and amazing scenery. It somehow manages to be a very cinematic game, but still have amazing gameplay. It's one of the few modern games that I revisit and play my favorite chapters again. I really enjoy playing on the PS4. I don't really know why, but all I know is that whenever I get a game for it I have fun with it. If I could, I would convert my entire Steam Library to Phyiscal PS4 copies (I'm working on it...)

Then we have the OG Xbox, but we have to put an enormous asterix here: it's only my 3rd favorite console if it's modded! Unmodded, I think the OG Xbox is one of the most boring consoles ever. With modding though, I have a lot to thank it for. It has learned me how to browse private IRC networks to get invites to private FTP shares to download questionably legal XBE files. It taught me how to upload a game onto the internet for others to download (oh yeah; I did that, one night, in 2006. It was the first night I slept with ear plugs (as I wanted my PC to be on so I could seed.) Even today I have fun testing different SuperDiscs for it and seeing how they are different. I think I will always prefer SlaYers 2.7 - it was simple, yet included all the stuff you could need. One of my favorite Xbox memories, and even just gaming memories, was that I made a list with checkboxes of every game we had installed to the (160 GB) HDD. That way, me and 2 friends, could keep track of what games we needed to beat and we sure did beat a couple of them. We didn't complete the list, but I think we did atleast 50% of them. It's the team work of this that I remember so fondlly - we were really motivated. Justice League Heroes is an amazing coop game if you haven't tried it.

Then we have the Wii, and it's basically the same reasons why I put it in the deserted island list; it plays a lot of different consoles. I also think it's a must have console if you're a speedrunner. I wouldn't be surprised if Wii sales got boosted like 200% after SRL launched, atleast in Europe. Getting a Wii and hacking it was much more inexpensive than importing a NES, SNES and N64 and the games we needed. Today I don't use it much admittedly, mostly because I now have imported all those consoles and I can play on original hardware. It's still my Gamecube though. I would kinda like to get another one so I don't have to switch region settings when playing European games.

And on the fifth spot I finally put the Wii U. It was a bit of a debate between the Wii U or the Dreamcast. I eventually decided on the Wii U. The Dreamcast I don't really enjoy playing games on. The controller is a bit wonky and the game library just isn't that great in my opinion. My favorite game on it is a terrible unreleased port of Half-Life (more specifically, Blue Shift). What I really like about the Dreamcast is it's really dedicated fan base and how it can, unmodified, read burned CDs using an exploit, and you know how much I like exploits.

I decided on the Wii U as it had some of the best games I have ever played. There weren't many games on it, but the few exclusives it got were 👏👏👏 awesome. I'm talking Mario Kart 8, The Wind Waker HD, Super Mario Maker, Bayonetta 2, Super Mario 3D World and last but not least: Captain Toad Treasure Tracker. All of these games were 5/5s in my book (except Bayonetta 2, I still consider that a 4/5). But when you're not playing the Wii U, it just kinda sits there and dusts. It's not until you play a really great game on it that you appreciate the hell out of it. There are some games I still wanna get for it, like the phyiscal version of Fast Racing Neo. I should look into getting more Wii U games sooner than later, because I have a feeling the prices aren't gonna go down much more, in fact, I think they will start going up.

On the Nintendo Switch: I am very excited. Atleast I am. I am not sure how many others are. I'm really gonna enjoy the new Mario game and the new Mario Kart when they come, and probably the new Zelda too, but I question the longevity of it. Sure all we can base it on, right now, is a 3 minute trailer.

Nintendo posted that list of how much third party support they have, but I doubt that list will be the same in 6 months. Where my big questions start coming in is when it comes to VR and stuff like the Project Scorpio. What are Nintendo's plans for VR? What are they gonna do when 4K gaming might become reasonable with the Project Scorpio?

One little mini theory I have, is that they can release a new docking station that will output 4K, but that doesn't really make sense either because apparently the main Switch is in the handheld unit?

I am happy that Nintendo decided to just release this little trailer, it gives us (even more) time to speculate and imagine.

I am very excited for it and I have pre-ordered the hell out of it.

Mini sidenote: I wrote this entire thing on my iPad in Byword with a Cherry G84-4100 keyboard while half lying/sitting in bed. Pretty comfortable. Not as good as a real computer though. 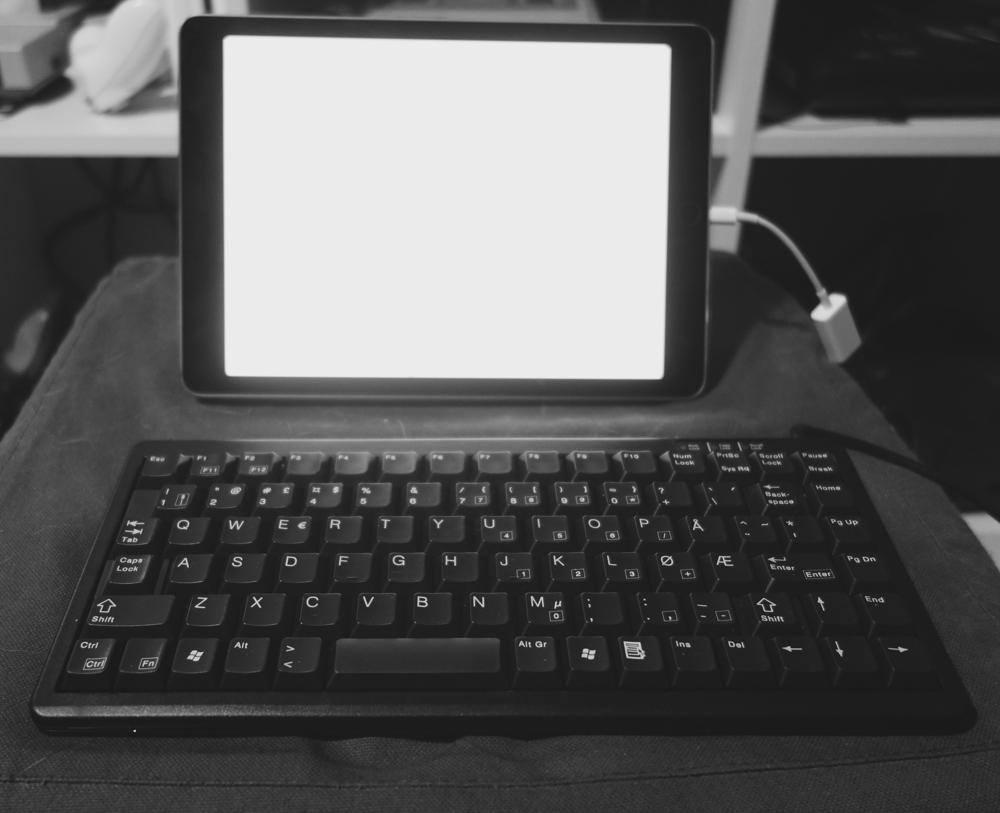 We have a dog with white fur.