It was just taking up space, dusting a lot, and I used it once a month. So I put it in my wardrobe, and later this year I'll go up to the attic to get the box and put it away.

I won't sell it, because I don't like selling big things such as consoles. They are annoying to ship and you don't get that much money.

So where did it go wrong?

Well, to be honest, it was never right to begin with. I never really, really wanted a Xbox One. Reason I got it initially was for playing Destiny with a friend. I had been playing it alot on Xbox 360 and I wanted to play it with this friend, who have a Xbox One. Around this time the Xbox One was starting to go pretty cheap too. I think I paid less than $300 and I got Halo: Master Chief Collection with that. Destiny was awesome on it. The controls were great, graphics were great, and I love Destiny.

So I enjoyed the week or so I played Destiny with my friend, and then the time I played it myself after he quit. I also played through Halo 1 & 2 on the MCC and had decently fun with those (see Games I beat in 2015.) I also got Diablo 3 when it went on sale during the summer and had fun playing that while binge watching Orange Is The New Black.

Then Rare Replay came out and I had a blast with that. I loved playing through Banjo-Kazooie on it. Lots of fun.

Somewhere around here the new Xbox One dashboard came out and I really hated that thing. I felt like it crippled the console. While I didn't like the navigation of the older dashboard either, this one wasn't any better! It was just slower and even more confusing in my opinion.

Then I also got Halo 5, because everyone was praising it, and the gameplay was fun. So I got it, for pretty much full price, beat the campaign, and then played multiplayer for a week and I was done with it.

And since then, my Xbox One was basically just dusting.

Around November 2015 I got a PS4 instead and had fun playing MGS5 on it and just liked it better as a console. The controller was nice. Not that I didn't mind the Xbox One controller either but I had a problem with mine (I'll come back to that later.) The PS4 felt a lot faster everywhere and just felt like the better console to play on. The dashboard was easy, fast and nice.

So the time between Rare Replay-Halo 5, and Halo 5-present, my Xbox One was just dusting. It was useless for everything.

I tried using it as a media player. The Plex and Netflix apps are nice, but my Xbox One has a defective fan in it so it makes a ticking sound which is super annoying. Even then, the PS4 was better for media as it has a 3.5mm headphone port I could utilize late at night.

I tried using it as a blu-ray player. It was useless at that too. My AVCHD Harmy Star Wars wouldn't play on it, and when I tried a regular blu-ray it was just slow and loud as hell.

And that was it. The Xbox One is useless in every aspect to me.

So, good bye Xbox One. Maybe one day I'll take you out again, when you have some exclusive I want or I really, really, really wanna play Rare Replay (not very often I want to). 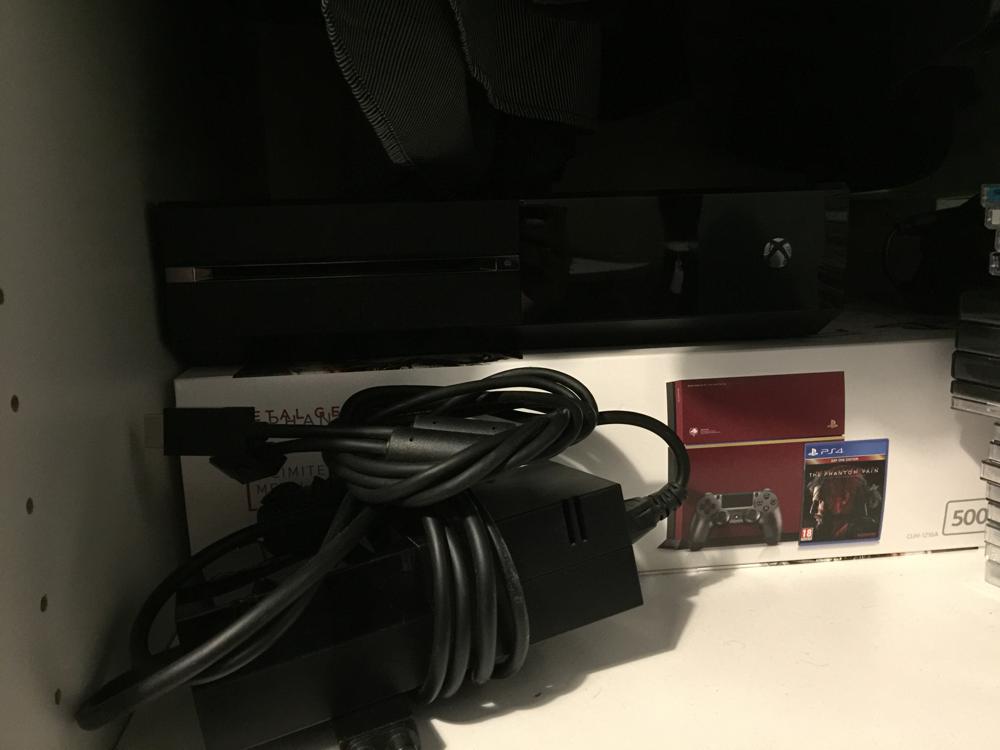 My Xbox One sitting in my wardrobe, on top of the PS4 box.